Synopsis: Written and directed by Academy Award® winner Sofia Coppola, Marie Antoinette is an electrifying yet intimate re-telling of the turbulent life of history’s favorite villainess. Kirsten Dunst portrays the ill-fated child princess who married France’s young and indifferent King Louis XVI (Jason Schwartzman). Feeling isolated in a royal court rife with scandal and intrigue, Marie Antoinette defied both royalty and commoner by living like a rock star, which served only to seal her fate.

Marie Antoinette was Coppola’s third feature film, and the second one in collaboration with producer Ross Katz after 2003’s Lost in Translation. Coppola offered a heavily stylized, modern view of the Queen, which was accentuated by the successful new wave, post-punk soundtrack. 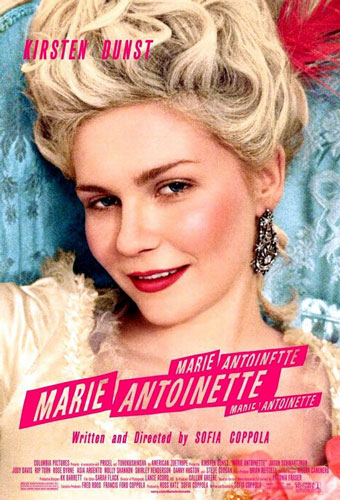 “I never imagined that my job would take me to Paris for nearly a year, but thankfully Sofia Coppola’s Marie Antoinette did just that. I had an apartment in the sixth that was beautiful and we lived and worked hard over that year. Amazingly, and entirely because of Sofia and her vision, Versailles let us shoot in places that were never allowed to be shot before. Though daunting, it was always exciting to show up at work at Versailles.

Sofia’s leadership guided us through a very tough shoot, which was complicated by intricate (and amazing) costuming, hundreds of extras, and real locations. I loved working with our cast, beginning with the exquisite Kirsten Dunst and the wonderful Jason Schwartzman. From Judy Davis to Steve Coogan, we were graced with some of the most talented people in the U.S., France, and Great Britain. It was an unforgettable experience with a huge learning curve and a great outcome.” — Ross Katz