Synopsis: The Fowlers are a typical family in Maine. Matt is the town doctor and loves to fish, his wife, Ruth, is the school’s choir leader, and their son, Frank, is home from his first year of college. Frank has fallen in love with Natalie, a mother who isn’t quite divorced yet from her husband, Richard Strout, whose family runs the local cannery. It makes Richard’s blood run cold to see his wife running around with another man. When the affair takes a sudden and tragic turn, the Fowlers are forced to confront the harsh reality of their situation and the inescapable consequences of their actions.

In the Bedroom was the debut feature film from actor/director Todd Field, and was nominated for multiple awards — including 5 Academy Awards (Best Picture, Best Actress, Best Actor, Best Supporting Actress, and Best Screenplay). 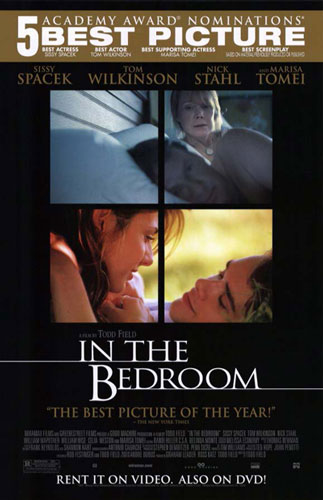 “When I read Todd Field’s “In the Bedroom” in 2000, I literally could not sleep at night. I thought I might die if I did not get to produce it. It was the most beautiful screenplay I had ever read. Thankfully, Todd, along with Ted Hope and John Penotti, allowed me to come on board. It was the most intense shoot I’ve ever had. We had very little money, very little time, and a lot working against us. But Todd was so clear on his vision for the movie, that every day I felt we were piecing together something very, very special. Todd is an auteur, and every detail in his work is extraordinarily thought through. His work with our great actors was deeply inspiring to me.

Todd would later unselfishly prod me and champion me as a director. His loyalty is incomparable. Working with my now life-long friend, Tom Wilkinson, makes it clear to me that I have worked with one of the greats. Sissy Spacek and Marisa Tomei and Nick Stahl brought so much heart and strength and passion to our movie. Little did we know, the film would get 5 Academy Award Nominations. All we had really hoped for was to get released. Early on in the process, some people felt the film was “too arty” to find an audience. Thankfully, the critics, along with Miramax recognized what Todd had achieved, and blasted the film forward. I think this film really stands the test of time. I recently saw it on cable for the first time in years, and I found it just as emotionally gut-wrenching as the first time I saw it.” — Ross Katz