Synopsis: What do drag queens, aspiring sex therapists, and Tori Spelling have in common? They’re part of a madcap night out in Manhattan for two frustrated guys who are trying to find a place…any place.

Gabe (Christian Campbell) and Mark (J.P. Pitoc) aren’t asking for much – just a simple one night stand. All they need is a place to seal the deal. Sound easy? Not when your neurotic best friend (Tori Spelling, The House of Yes, TV’s “Beverly Hills, 90210”) is trying to revive a dying musical career off-off-off-Broadway, your cabaret singing co-worker has just broken up with his boyfriend of seven years and the entire city seems set for a nervous breakdown.

It’s one chaotic event after another as these two hopeful romantics try to stop the city so they can get off!

Trick has endured as a modern LGBT romantic-comedy classic, with a successful soundtrack and some of the most quotable lines ever! 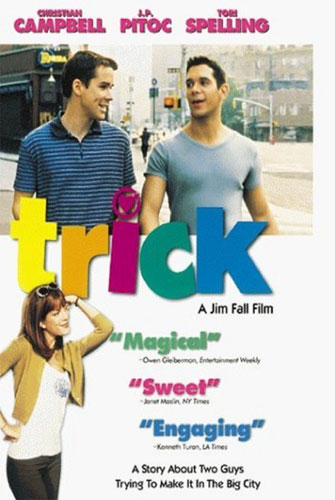 “Jim Fall’s Trick is the first movie I ever produced, and it was an amazing experience. Shot for just $400,000 the film would end up in competition at Sundance and being purchased by Fine Line Features for distribution. I loved making this movie during a very steamy, hot summer in New York. Jim is a great leader and had a very clear vision for the film, which turned out to be a lovely, warm, romantic comedy unlike anything I’d seen before.” — Ross Katz